Diverging diamond interchanges are quickly becoming a popular solution to improve traffic flow and safety at interchanges. Some professionals have called it the “way of the future,” while others have called it “too weird.” Soon, students, alumni, and visitors will have a chance to make their own judgement.

Set to be completed at the end of 2019, the $46.7 million project will replace the current at-grade intersection at Southgate Drive and Route 460. This project will consist of two new bridges over Route 460 and the relocation of portions of Huckleberry Trail, Research Center Drive, and Southgate Drive.

Over the past fifteen years, the stoplights on Route 460 have been gradually eliminated. South Main Street and Tom’s Creek Road intersections have both been removed due to the high volume of traffic. Once this current project is done, drivers will be able to go from Interstate 81 to Pearisburg without hitting a stoplight. The addition of this diverging diamond interchange will not only help with day-to-day traffic, but will improve efficiency for large events like Virginia Tech football games.

The Virginia Department of Transportation has provided a detailed explanation, along with a virtual driving simulation through the proposed interchange.

Ralston has been working on the project since January 2016, but has been with Branch Highways since 2014. He is a two-time Hokie alumnus, with a Bachelor of Science degree in animal science in 1999 and a Bachelor of Science degree in civil engineering in 2007. “Every day I am referencing something one of my CEE professors said. I am very fortunate to have had the professors I had,” he noted, adding, “The interesting thing about a degree in civil engineering is that it is not a professional degree. I didn’t come out of there knowing everything I needed to know to be a project manager, but I definitely had the fundamentals and the work ethic that were important to practice what I had learned and to improve my work through my experiences. That is what got me to where I am today.” For Ralston, it is a dream come true to now have the chance to transform the university where he spent “the best years of my life.”

For more information about the diverging diamond interchange going in on Route 460 and Southgate Drive, go to http://www.virginiadot.org/projects/salem/southgate_connector_-_blacksburg.asp. 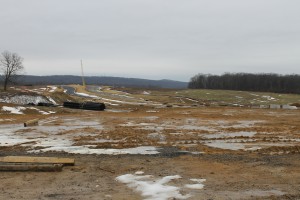